Linux is quite a desirable technology skill in the software field since it helps to gain greater control over system functions, quicker management of operating systems, enable scripting to automate repetitive tasks, etc. On top of that, Linux has huge online community support that makes it easy and available for learning.

This article is a compilation of frequently asked Linux commands during interviews by companies in Southeast Asia.

The mv command (short form of move) is used to rename or move the files and directories from one location to another.

To rename more than one file, we can use the below format of the mv command. Here we are moving files: file1 and file2 to a directory named dir1.

And, we can rename a whole directory by using the below command:

mv command can be used to rename multiple files by using for loop as below example. It will change all the files in the directory with extension .txt to .pdf.

Rename command renames the file based on the options and expression provided.

Where options could be:

Creating a new file in Linux

We can create a new file using the touch command. If the file exists, this command will update the timestamp on the existing file.

Multiple files can be created using a single touch command by specifying their name separated by space as shown below.

Note: To create a new file, users should have ‘write’ permission on the directory otherwise ‘permission denied’ error will be received.

cat command is commonly used to view the content of an existing file or to concatenate files.

echo command is used to print trings which are passed as arguments to the standard output. However, we can redirect the output to a file, thus creating a new file.

To create a new file with text inputted directly:

Or we can just create a new empty file, without providing the text.

Differences between BASH and DOS commands 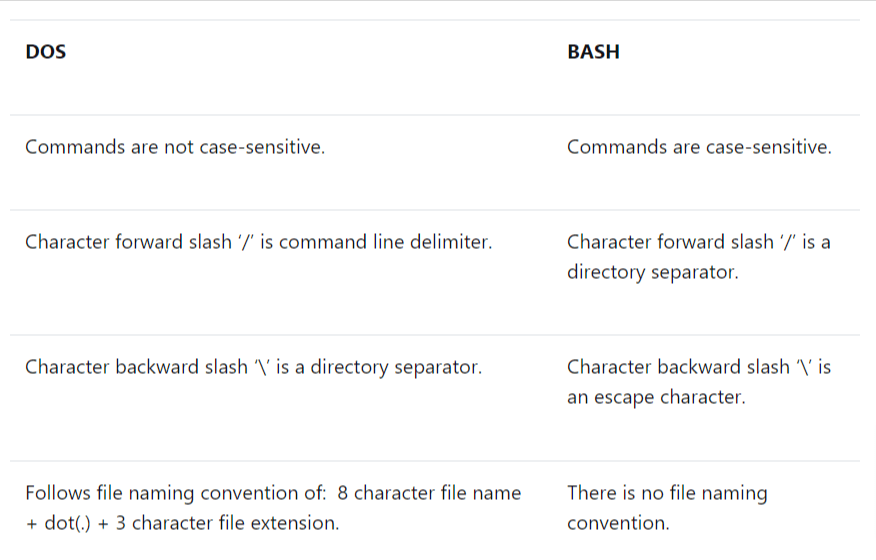 To list all the files and subdirectories present in the directory

Find out current directory you are in right now

Note: To view the newly created directory, we can use the ‘ls’ command to see if the directory has been created and present in the listing.

To verify that a directory has been successfully removed, use 'ls' command to view the directory listing.

To terminate a process in Linux

We can terminate a process in Linux by using the ‘kill’ command. It takes a pid(process id) as an argument. When a process becomes unresponsive and does not shut down on its own, then we need to use the kill command to terminate it. We use the ‘ps’ command to list the currently running processes and display information about those processes including pid.

Where:
PID – unique process ID
TTY – terminal type
TIME – time in minutes and seconds since the process has been running
CMD – the name of the command that launched the process

Find out more on terminating processes is here.

View history of the commands executed

The history of the commands on the command line is stored in a history file. When we run the ‘history’ command, we can see the list of all the commands that were run before.

When used with an option like ‘5’, it gives the 5 most recent commands from history.

grep stands for  ‘global regular expression print’, i.e. it is commonly use for finding the input pattern that is present within a file. It searches a particular pattern of characters in a file and displays the lines which contain that pattern.

Search for a String in a single file

We can search multiple strings in a single command using OR operator “|” as below:

To perform a search by excluding specific text or pattern, we use -v option as shown below. This command will display the lines which do not contain the ‘fruit’ string in file ‘example.txt’ .

Filter the Output of a Command

We can use pipe “|” to filter the output of one command according to the search condition provided in grep.

First, use ls command to find out a file permissions.

(rw-r--r--) in the example above means that the file owner has read and write permissions (rw-) while the group and others have only read permissions (r--).

chmod(change mode) command is used to assign and change file/directory permissions either through symbolic or numeric mode.

Operation flags (-+=) defines if the permission are to be removed, added or set:

The below table depicts the permissions in octal numbers: 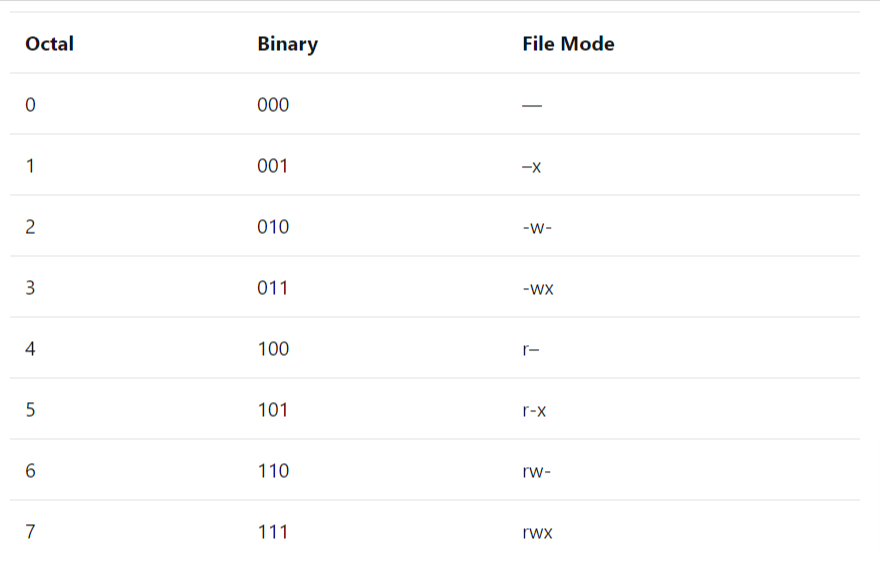 Differences between chmod and chown