We cannot deny the importance of Microservices in the current market scenario and there are good reasons for this. Microservices are providing faster software, more innovation, better software at a low cost. Therefore more and more software engineers are trying to make a career in Microservices. Here in this article, we have listed frequently asked Microservices interview questions.

We have divided the Microservices interview questions into the below sections:

What do you understand by Microservices?

Microservices is an architecture and approach where many small services constitute a large and complex application.  One service has a single and precise functionality to perform equipped with a defined interface to interact with other services. These small services can be independently deployed, maintained, tested, and are scalable. A single small service/ module/ process is a microservice.

The Microservices architecture is built around a business domain where the services communicate with each other. Different teams have ownership of different services/ modules.

What are the advantages of Microservices?

Explain the architecture of Microservices

The Microservices architecture has the below four main components:

Explain the important features of Microservices

What are the common challenges during Microservices implementation?

Explain the differences between Microservices, Monolithic, and SOA. 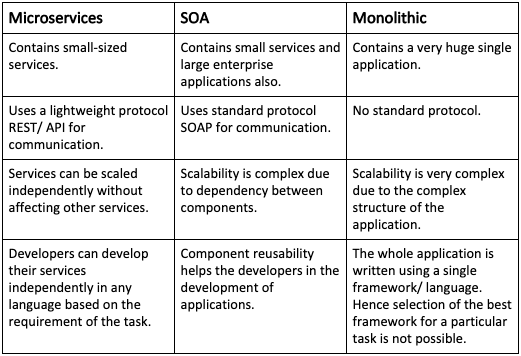 What are Coupling and Cohesion in Microservices?

Microservices has small services serving as individual modules and to communicate with each other they use protocols. In a poor design, they may be excessively dependent on each other with a lot of communication happening between them. Another case could be where the methods of the same module are working in isolation with each other without any communication. We would want to avoid both situations.

Coupling: It is the degree to which the modules are dependent, interacting with each other. Hence, coupling works across modules. It can be achieved by designing good interface boundaries.

Cohesion: It is the degree to which the methods/ elements of a module serve a common purpose together. Hence, cohesion works within a module.

An ideal Microservices architecture will aim for high cohesion and low coupling to achieve below:

What do you know about Spring Boot?

Spring boot is a Java-based, open-source framework which helps in creating production-ready and stand-alone applications. Spring boot applications can be written without the need of setting up the whole Spring configuration. Therefore, Spring Boot is easier to understand, faster to develop, and increases productivity.

What is Spring Cloud in Microservices?

It is an open-source module of Spring which helps in quickly developing and deploying the distributed applications on the cloud. Spring Cloud in Microservices provides tools to create patterns for distributed systems rapidly. E.g., service discovery, circuit breakers, configuration management, intelligent routing, etc.

How to implement Spring Security into a Spring Boot application?

Step 1: Define dependencies in Maven or Gradle as below:

How to perform exception handling in Microservices?

In case of an exception in service, we need to properly handle it and return a response to convey details about the exception.

ExceptionHandler for Controller based exceptions

It is a Spring annotation which helps us in handling the exceptions thrown during the execution of Controller operations. This can be used on methods of @ControllerAdvice classes to apply an ExceptionHandler on multiple controllers. It can be applied to all the controllers or a subset of them.

It provides basic exception handling methods, we can override them to provide a more sophisticated error response.

We can create new methods for exception handling using ResponseEntityExceptionHandler as our base class.

What is the Open Authorisation Protocol?

Open Authorisation Protocol or OAuth is an authorisation protocol which has two versions – OAuth 1.0 and OAuth 2.0. It is an open standard for interacting with protected data on the internet. Through OAuth protocol end-user’s account information is used by third-party applications like Facebook without exposing the user’s credentials.

OAuth 1.0 works on cryptography and therefore it is difficult to implement by the programmers. OAuth 2.0 is easier to implement but due to the use of HTTP/TLS the security can be compromised. Hence it becomes important to work on security features properly while using OAuth 2.0.

Why use RESTful API in Microservices?

An API(Application Programming Interface) defines the rules, protocols, commands, permissions for the users/applications to access the data or service. In the case of Microservices API define the rules for data sharing, access permissions, and other commands. RESTful API is HTTP based type of API which is widely used in Microservices.

RESTful API in Microservices acts as a glue to hold the different services of the application together.

RESTful API is used in Microservices because:

What is Idempotence in Microservices?

If an action(call) is repeated multiple times and the server state(or result) remains the same after every call then this action is idempotent. It means that after one call or multiple calls we receive the same result.

It is important that Microservices must have the idempotence property because there are scenarios where APIs get duplicate requests. In such scenarios, the system should be fault-tolerant and should not give erroneous results.

E.g. REST requests- GET, HEAD, OPTIONS, TRACE are idempotent because they do not change the resource state at the server. They are just accessing the existing state/ data.

REST request POST is NOT idempotent, because every time we POST a request we are making changes in the server state by adding new resources. Hence, the result of every POST request will differ.

Microservices is used by most of the technology and social media giants today. A career in microservices can be really rewarding and therefore we have compiled the most frequently asked questions for easy preparation. Here we conclude the article and hope that you find it helpful in preparing for microservices interviews.