DevOps works on the principle of collaboration between teams with a focus on faster delivery.  It can be understood as a culture among people of the development and operations teams that leverages the power of automation.

DevOps touches every component of the software life cycle- development, testing, operations, security, and business. Big businesses and small enterprises everyone is embracing DevOps today and hence this becomes an important factor in a Tech-related career.

We have divided the DevOps interview questions into the below sections:

The phases as listed below,are non-exclusive of each other. They all work in tandem.

2. What are the differences between DevOps and Agile?

The below table depicts the differences between DevOps and Agile: 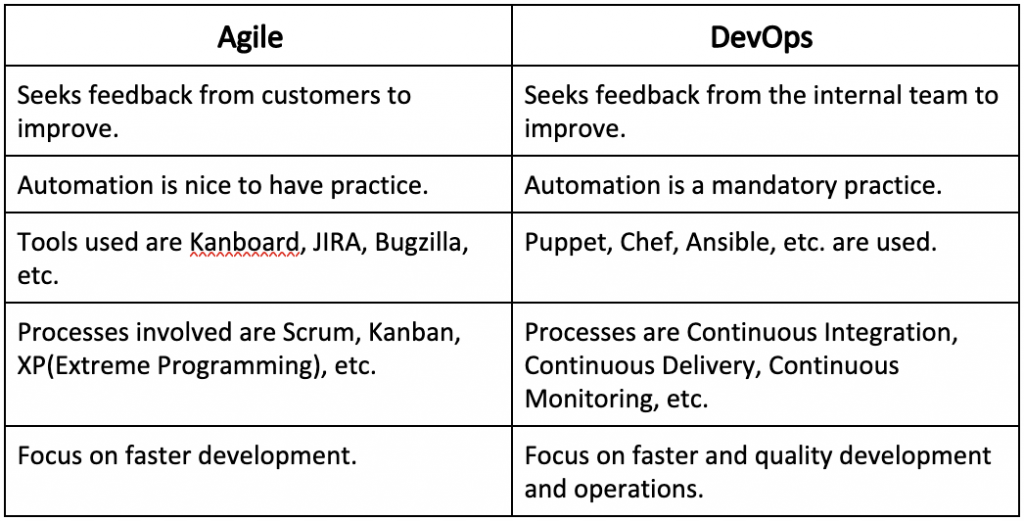 3. Explain the various components of DevOps.

Components or processes of DevOps are:

4. What are the advantages of DevOps?

5. What are the popular tools in DevOps?

1. What is the Version Control System in DevOps and its advantages?

A Version Control System(VCS) stores, tracks, and helps in managing the different versions of the code or files. Also, it stores the data related to the changes made e.g., who made changes, when were the changes made, and what are the changes. Additionally, in case of any conflict or failure, the code can be reverted using the VCS.

Advantages of Version Control System in DevOps are:

2. What are the VCS tools that you have worked with?

Top popular VCS tools are below:

3. What do you know about Git in DevOps?

Git is an open-source distributed version control system(DVCS). Each workstation/ team member has its local repository cloned from the main repository.

Features of Git in DevOps:

Below are the common Git commands and action list: 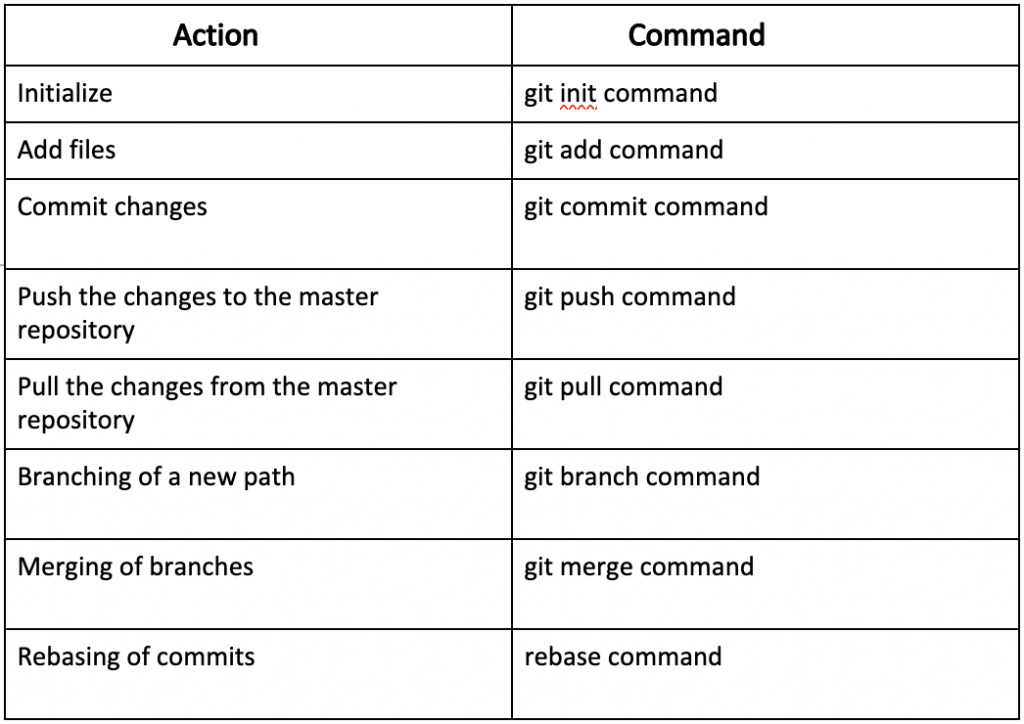 5. What is Infrastructure as Code(IaC)?

Benefits of Infrastructure as Code:

It is a process of automatically integrating code from different developers into one central repository. It is a continuous process repeated many times a day to maintain consistency. After CI, automated test runs are executed to catch the bugs as early as possible.

2. What are the advantages of Continuous Integration?

CI/CD pipeline is a set of steps to automate the whole software delivery process starting from coding. In detail this pipeline contains automated steps to code(commit), build, test, and deploy. However, it can differ from team to team since the teams define the steps themselves. The diagram below depicts an example of a standard CI/CD pipeline flow.

4. What are the success factors for CI/CD pipeline?

Below are the success factors for the CI/CD pipeline:

Infrastructure as Code(IaC) is a form of Configuration Management that has the below steps:

7. Difference between orchestration and classic automation to know for DevOps interview questions? 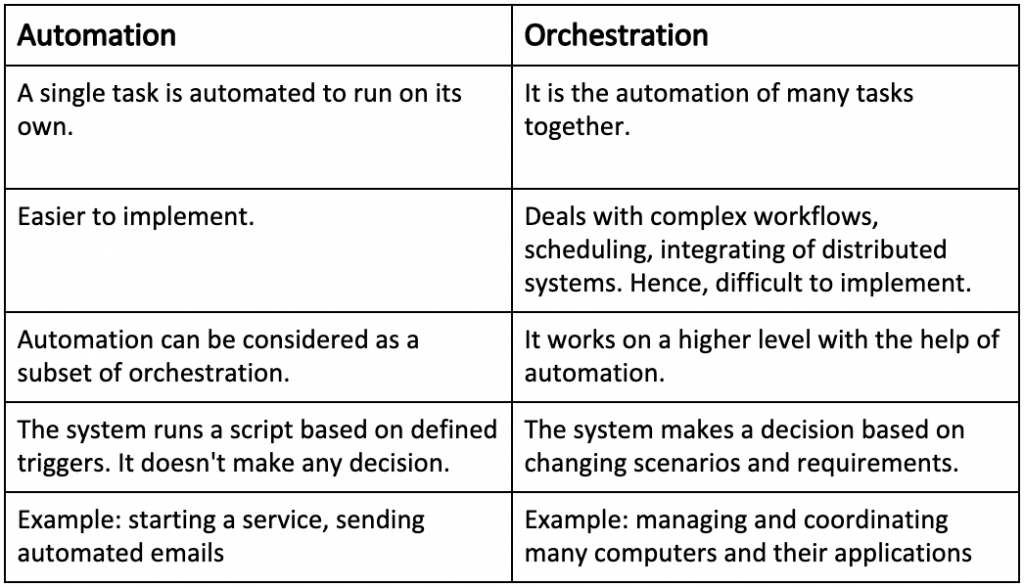 8. How are Containers being used in CI/CD?

Containers are standalone packages that are ready to run. They contain code, libraries, configuration, system tools, and other dependencies packaged into a single package of software. They do not include the Operating System in the package as is the case with virtualization.

In this section, we have compiled the DevOps interview questions related to Continuous Testing.

1. Explain the testing phase in DevOps:

Code, deliver, test, and deploy are continuous tasks in DevOps. Where the testing is performed during the whole development and deployment cycles. Hence, testing is not confined to functional and unit tests alone. This means performance, operations, security, data analysis all are part of testing activities. So, Continuous testing helps in gaining continuous feedback and thus improves the quality of software.

1. Explain the difference between Asset Management and Configuration Management:

2. What is Puppet and its advantages?

Puppet performs the below tasks:

3. Explain the architecture of Chef:

Chef is a configuration management technology that provides a base to define Infrastructure as Code. Chef uses Ruby language and creates domain-specific language(DSL).

The architecture of Chef:

The three components of the architecture are:

It is a workstation of the system administrator which interacts with the server and nodes.

The subcomponents of the workstation are:

Works between workstation and nodes. Storage of cookbooks and metadata.

They are managed by the Chef server using Chef client. Nodes can be storage devices, network devices, servers, etc.

4. What is Continuous Delivery?

According to AWS - Continuous delivery is a software development practice where code changes are automatically prepared for a production release.

5. What is the use of Ansible?

Ansible is an automation tool that covers the following  in the DevOps process:

6. List a few tools which are used for configuration management:

This section has DevOps interview questions based on Configuration Monitoring, Kibana, Splunk, and Sentry.

1. What is the purpose of Configuration Monitoring?

With the evolution of CI and CD processes,  Configuration Monitoring has also evolved. We need to monitor the performance of infrastructure and applications. So that we can identify the issues and resolve them before causing any impact on end-users.

The purpose of Configuration Monitoring is to monitor below:

2. What is Kibana and how is it used?

Kibana is a visualisation tool that helps to visualize and create a dashboard using log data. The visualization feature helps to visualise data in the form of charts, graphs, scatter plots, data tables, donuts, and maps, etc. Kibana supports dynamic and adaptive dashboards based on data queries.

Kibana is used in conjunction with the other two products of the same company ‘Elastic’. These two products are Elasticsearch(database for data) and Logstash(collects, parses, and stores logs).

3. How can we create a Kibana dashboard?

4. What are the advantages of Splunk?

Splunk is a centralised tool for log analysis. It analyses the data log for machine learning, fraud analysis, security, user behaviour, business analysis, etc. The data can be structured, unstructured, and complex.

The advantages of Splunk are: