C is a general-purpose programming language and though it is an old language, it is commonly used by businesses especially, enterprise applications where performance is the priority.

In this article, we will focus on the top commonly asked C programming interview questions into the below sections:

What are the basic data types in C?

The basic data types in C are:

It is used to store whole numbers, may have below types depending on their sign and size:

They are used to store real numbers(with decimal points). Floating point data types in C  have below types based on size:

They are used to store character values and can have below types based on sign:

The void data type is used to depict “No value” when a function returns nothing to the calling function, it is specified using Void.

What is the range of value that an ‘int’ data type variable can hold?

What is the enumerated data type in C?

The enumerated data type is specified using keyword-’enum’. It is used for creating user-defined data types which have integral constants as their elements.

In the below example we have created an enum data type ‘week’ which consists of integral constants – Sunday, Monday, Tuesday, etc.

In the main program, we have created a variable called ‘today’ of enum data type ‘week’. This ‘today’ variable may store any one of the integral constants from the enum data type ’week’.

Explain the String functions available in the C language 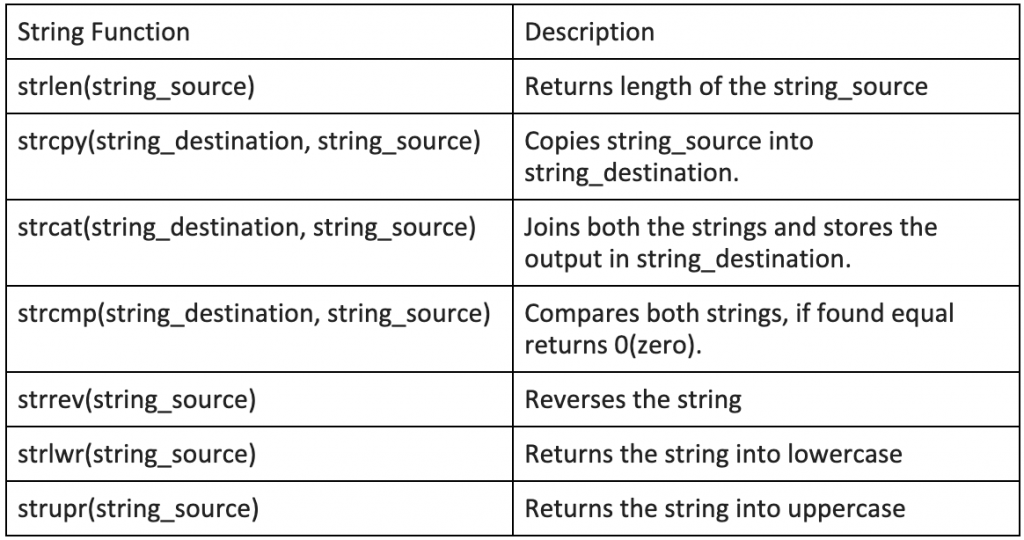 What is typecasting in C?

Typecasting refers to converting a variable’s data type into another data type explicitly by the programmer.

Type conversion can be performed in two ways:

Performed by the C compiler automatically, without any manual/programmer indication.

Example: It is performed by the compiler during the execution of an expression where two or more data types are present. The small data types are converted into large data types so that data is preserved without any loss.

It is deliberately performed by the programmer in the code by mentioning the required data type and this is known as typecasting in C.

Example: In the below example, we have deliberately changed the type of ‘c’ from float to int by writing the expected data type in brackets before the variable name ’c’.

What is the difference between local and global variables?

What is the difference between an actual parameter and a formal parameter?

How can we store a negative integer?

To derive a negative integer we calculate two’s complement of the positive number.

This can be done in a two-step process-

What is the difference in data storage between an array and a pointer?

Below are the differences between an array and a pointer in storage:

What is the difference between call by value and call by reference?

Which function is used to compare two strings?

What is the difference between a String and Array?

Below are the differences between a String and Array in C:

Can we convert a number into String and vice-versa?

Explain the difference between strncat() and strcat() in C.

Find code snippets describing the differences between strncat() and strcat() below:

What are the different operators in C programming language?

There are 6 types of operators in C language:

To perform relational operations between operands.

To perform logical operations between operands.

To perform bit-by-bit operations on bits.

To assign value to a variable.

These are special or miscellaneous operators.

Read in detail about the operators present in the C language here.

What is the difference between usage of the increment operator as ‘++i’ and ‘i++’?

If we are using the operator ++ only with the operand and without assigning the value anywhere then in such cases, there is no difference in the usage and value of the operand.

The difference arises when we assign the operand into another variable after using the increment operator. This happens because operator precedence works on the expression and provides different output.

Now, in this case, due to the fact that the prefix ‘++’ has higher precedence than ‘=’, first the ‘++’ is executed. So i is incremented first and the value of i is 6. Now the next operation of assignment is executed, j is assigned the value of i , i.e. 6.

What are bitwise operators in C language?

Below are the bitwise operators in C with examples:

What is a memory leak in C?

Explain the difference between calloc() and malloc() functions.

malloc() and calloc() are functions to allocate memory dynamically at runtime. Below are the differences between the two:

Explain the advantages and disadvantages of pointers in C

Advantages of pointers in C:

Disadvantages of pointers in C:

You may read more about pointers here.

What is a dangling pointer in C language?

A dangling pointer in C  is a normal pointer which is pointing to a memory location that is either deleted or deallocated.

In the below example the pointer ‘ptr’ is pointing to location ‘a’ which has address ‘5000’. Now later in the program, we released ‘a’ because it is a local variable of a function, but the ‘ptr’ is still pointing to ‘a’. Hence, ‘ptr’ is a dangling pointer now.

What is the difference between static and dynamic memory allocation in the C language?

What is the difference between NULL and VOID pointers?

A null pointer is a pointer to any data type which is assigned a NULL value.

Void pointer is a data type itself, which remains void until some address reference is assigned to it. When we do not know the data type of the value which the pointer will point to, then we use a Void pointer.

Below are the differences between NULL and VOID pointers.

What are the different file functions in C? 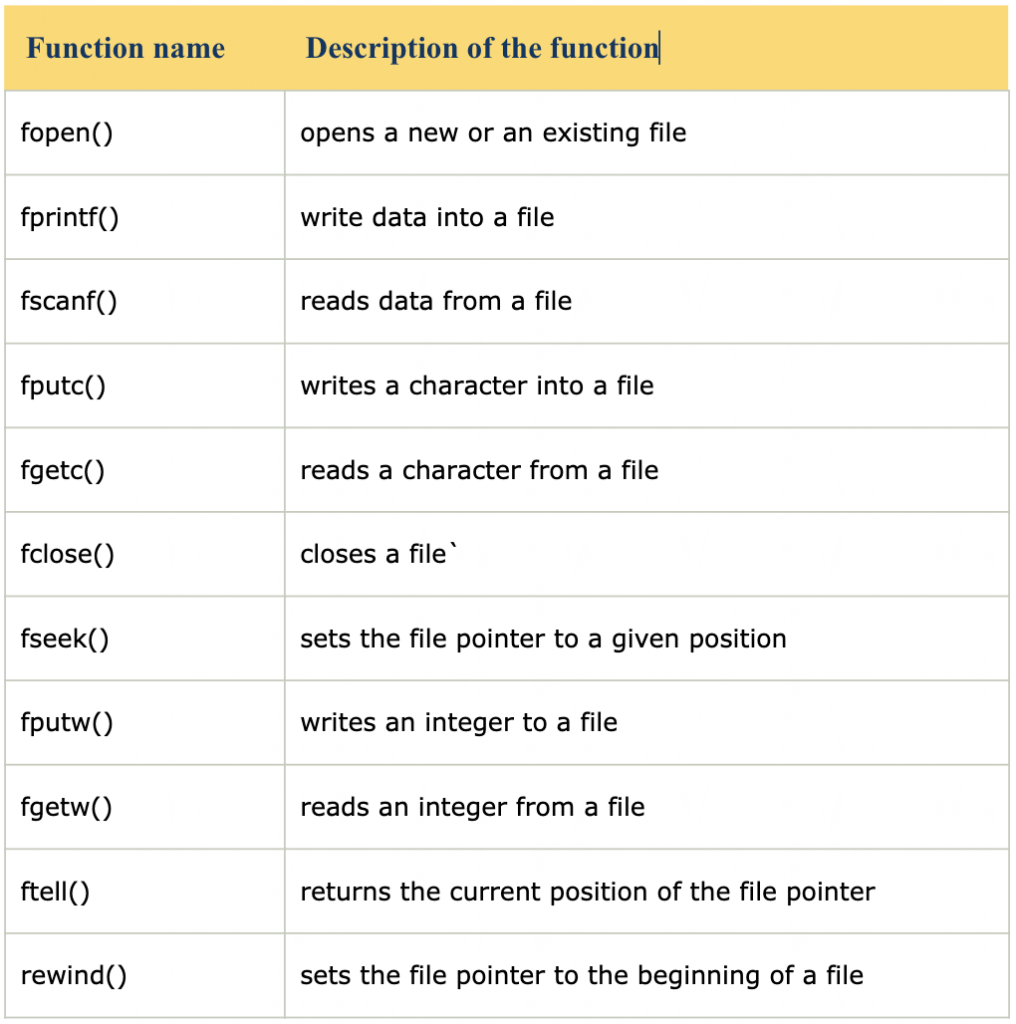 What is the difference between Random Access File and Sequential File in C?

When we want to access data from a sequential file, we need to traverse the data sequentially from the start till we reach the required data record.

Below are the different file opening modes in C:

Why do we use the rewind() function in C?

Rewind() is used to set the file pointer to the beginning of the file.

This function does not return any value. We should include the ‘stdio.h’ header file in the program to use this function.